Here's a project that uses two Arduino boards to communicate wirelessly - the first Arduino reads a soil moisture sensor and a temperature and humidity sensor, and sends the data to a second Arduino that displays the data in a graph and text. You can use it to monitor when your garden needs watering, or even as a basic weather station. Alternatively, you could use completely different sensors to create your own custom monitor.

Receiver just uses the LCD shield and so no further connections required.

Currently we have libraries on our website that have been modified to work with our modules. If you experience issues look on the product pages for an alternative library to use.

This is similar for both units so it is a good place to start. Get two radios and two shields and solder them similar to the following pictures: 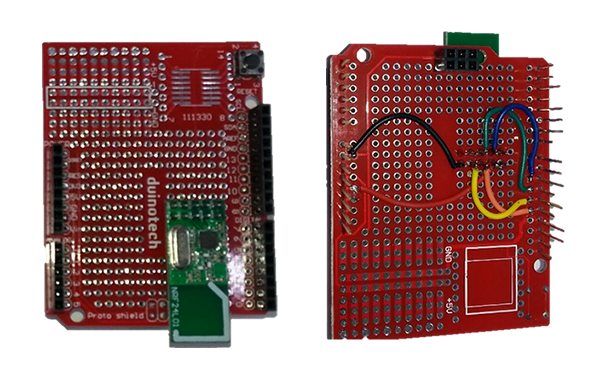 The radio hangs over the bottom of the shield to allow for better radio reception.

Mount the shield on both of the UNOs and mount the LCD on one as the receiver. The transmitter has not been connected to any sensors yet but that is ok as we're just testing the radio link.

Download the sketches that go along with this project and upload onto each UNO. You should be able to check that the LCD screen initialises and displays something like the following: 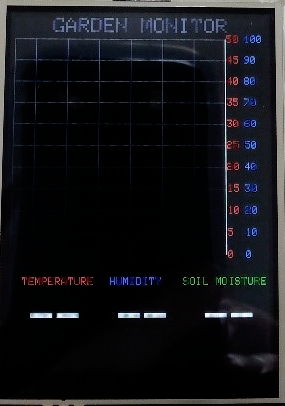 If the radios are both working correctly you'll see a green 'R' flash in the top right corner of the display about every five seconds and after a few minutes numbers and graph lines will appear.

If the radios are not working check the wiring for both prototyping shields.

The receiver unit is complete, but the transmitter (the one without the screen) should be powered down so we can add the sensor modules. We've used two groups of red, brown and orange wires from the WC6028 and wired the reds to the +5V bus and the browns to the GND bus at the end of the Prototype Shield.

The transmitter unit can now be powered up again and after a minute we should see valid data appearing on the display.

The final step will be to install the units where they can be used. You might need to fit a rainproof container if the transmitter is to be set up outside and also extend the Soil Sensor wires.

Download the source code and extract into a new folder, open the .ino file in the Arduino IDE and press upload.

There is not much to operating the transmitter as it automatically transmits about once every five seconds. The code for the transmitter simply initialises everything, reads the sensors, then transmits the data along with a checksum code and waits five seconds until the next transmission is needed.

The receiver is a bit more complicated and most of the code is to do with drawing and updating the screen. During the setup() function the screen and radio module are initialised and some of the unchanging parts of the screen are drawn (title, y-axis and text at the bottom of the screen). During the loop() function the UNO mostly waits for radio data, then every minute (this can be changed by the SAMPLET value) the most recent data is saved to an array. If it's a multiple of 15 minutes this is also saved to another part of the array and similarly if it's a multiple of two hours. This gives us samples that cover either an hour, a day or a week. After a sample is saved the rest of the screen is redrawn: the graphs, x-axis and large numbers at the bottom of the screen.