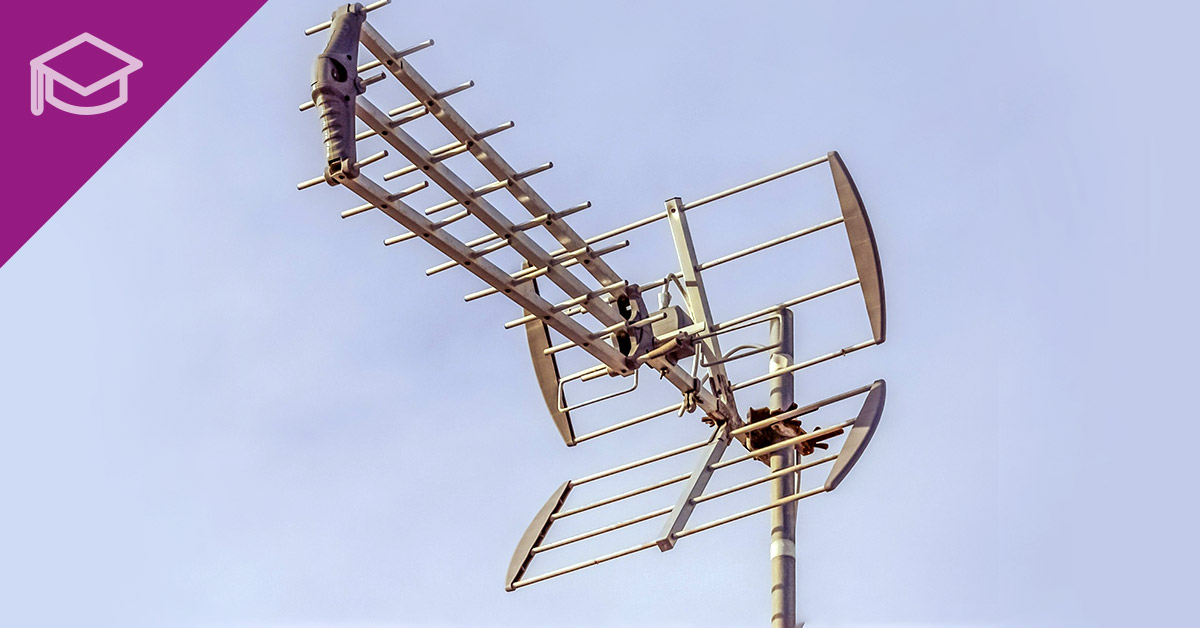 When it comes to TV antennas, do you know your Yagi from your phased array?

Free-to-air analogue TV was phased out years ago, but if you've been relying on your old antenna that was built for analogue signals, it might be time for an upgrade. Even though an antenna will pick up analogue and digital equally well, channels that have shifted to different frequencies can be a different story.

As long as you get an antenna optimised for the right frequencies, you're good to go… but what about all the other jargon you're likely to encounter when shopping for a new aerial?

dBi is the unit of measurement for gain, or how much electromagnetic signals are 'concentrated' by the antenna. It stands for 'decibels relative to isotropic' radiation. Translated into English, that basically means how well the antenna receives a signal it's pointing at, relative to an antenna that is exposed to the same amount of electromagnetic radiation from all angles.

LTE/4G filters are designed to screen out disruption to TV signals that are being transmitted at the same frequencies as some mobile communications. They're a standard inclusion with many TV antennas.

Phased array actually has two (or more) antennas working together. The phase of the signal each antenna receives is adjusted so that the waveforms reinforce each other, resulting in strong, clear reception. Phased arrays work well in areas where you don't have direct line-of-sight to the transmitter, and sometimes work best when they’re not even pointing in the direction of the transmitter.

Signal amplifier simply boosts the available electromagnetic information collected by your antenna. It's not a miracle cure for low-reception areas, but can be very useful with an indoor antenna or if there is a particularly long cable between your antenna and TV. Since it amplifies noise as well as signal, a unit with separate VHF and UHF gain controls is a good idea.

Yagi antenna is named after only one of its inventors (Hidetsugu Yagi), and ironically, it was his partner Shintaro Uda who did the lion's share of development. The design relies on a central element that collects electromagnetic radiation that is absorbed, re-radiated and reflected by several perpendicular elements. These antennas (not available in NZ) are great for metropolitan areas and will also pick up DAB+ radio.

See below for more details about antennas.

How to select the right TV antenna for you

Australians watch an average of 670 hours of television per year!* It makes sense then to invest in a great quality entertainment system. The ongoing technological advancements in televisions are amazing, but not many people understand that amazing tech means diddly-squat if you don't have a good quality antenna. If you're considering investing thousands in a new television, then you're mad not to invest in a new antenna. It'd be like buying a Porsche then fitting it with old tyres!

Click here to select the best TV antenna for your location.

How important is an antenna?

The most common reason for poor TV reception - other than geographical location - is poor antenna quality and/or poor antenna installation. Antennas 'catch' radio frequency signals which have been transmitted from a television transmission tower. These signals are then converted to an electric current which is sent to the TV to reinterpret into a picture. TV picture quality can only ever be as good as the signal it receives from the antenna. So you could say antennas are very important!

So I definitely need one?

It really depends on your configuration and what kind of television programming you want to view. Generally, if you want to be able to watch all free-to-air television channels, you will need to have an antenna. Cable and satellite television set-ups can receive some free-to-air channels - however availability is based on your set-up, chosen service and location. Therefore, if you have a cable or satellite service installed and are happy just having whatever free-to-air channels you can get, then you may not require an antenna for your set-up - but your cable/satellite provider should be able to advise more specifically to your particular case.

I'm going to buy a new antenna, what should I look out for?

Australia's television transmission signals are digital (Australia's analogue transmission signal was switched off in 2013). So first and foremost make sure your antenna can receive digital signals. You also need to make sure your antenna's band and channels marry up with your location's transmission specifications. In Australia, signals are transmitted on VHF band 3 (channels 6-12) and UHF band 4 & 5 (channels 28-51). As a general rule, high density metro areas work off a VHF signal, and regional low density areas work off a UHF signal.

Antennas are either UHF, VHF or a combination. In high density areas, VHF (Very High Frequency) antennas are recommended as their signal responds better to obstructions. The signals aren't very powerful but ample enough to cover the shorter transmission distances required in metro areas. UHF (Ultra High Frequency) antennas are widely used throughout regional areas where the transmission distance is longer and obstructions are fewer. UHF signals are much more powerful so transmissions can be picked up with smaller antennas. Generally the choice between VHF and UHF has been made for you, based on where you live.

Elements are the visible rods/poles/cables of the antenna that receive the transmission and convert it to electrical energy for the TV. Generally speaking, if your antenna has more elements it will generate a stronger electronic signal (and will cost more). Element lengths are very precise and specific in their physical position on the antenna. Again your geographical location will determine the number of elements you should invest in. Jaycar's 6 element VHF antenna (LT3153) is ideal for metro areas, whereas the 43 element UHF antenna (LT3181) is suited to medium semi-regional signal reception areas. For outlying/regional areas try the heavy duty phased array antenna (LT3154).

How do I install an antenna?

Antennas need to be installed facing the closest television transmission tower and clear of obstacles - such as trees or other buildings - which could affect the transmission signal. If you're simply replacing an old or broken antenna then you should be able to do it yourself, especially as it's likely you already know which direction the antenna needs to face. If you're installing a new one then look at how neighbours have placed theirs - they've done the hard work to get the best signal so just copy them! If you can't see what the neighbours are doing, then you can use Jaycar's Signal Strength Meter (LT3332) to take the guesswork out of the process. If climbing up and down a ladder isn't an attractive proposition, then bring in a professional! Often you can buy the antenna, and then get someone more sprightly and unafraid of heights to do the hard work for you.

Not really. Since Australia moved to a digital signal, anyone with an old analogue TV would already be using a digital set-top box to 'interpret' the digital signal for their TV. However, don't be disappointed if your new antenna makes no difference to your picture quality! Your system will only ever be as good as the weakest link, which in this case would be your analogue TV.

How long will my antenna last?

Antenna deterioration is not a case of if, but when. Because they are outdoors, they put up with a lot of punishment from both weather and wildlife. If your television's display suddenly deteriorates, you should definitely conduct a visual inspection of the antenna to check for quality issues or broken elements. Of course sometimes that's easier said than done. Stand alone buildings will have their own antenna, while multi-dwelling units - such as apartment blocks and townhouses - use a shared antenna system. If you live in the latter, you'll need to liaise with your body corporate or landlord about the issue.

What about indoor antennas?

We do offer a range of indoor antennas at Jaycar but they're really only going to deliver a result in high-density areas with close proximity to a TV tower. Be warned: their effectiveness at picking up a signal can be hindered by wall insulation, plumbing, electrical wiring, roofing materials and even people. An indoor antenna can be a worthwhile investment but there are many variables with few guarantees. Jaycar's Indoor Desk or Wall Mount Antenna (LT3116) is economical enough to warrant experimentation. It's worth a shot, especially when your viewing pleasure is at stake! If it doesn't solve your particular reception issues, you're welcome to return it to the store for an upgrade or refund within our conditions - no trouble at all!

Jaycar have the right antenna for you. Come in-store to discuss your requirements - we'll make sure you leave with everything you need.