Want to see who's trying to enter your room? Or do you want simple key-less entry into your work shed? This project makes it easy using the raspberry pi camera and relay to door-strike to perform a simple locking mechanism. 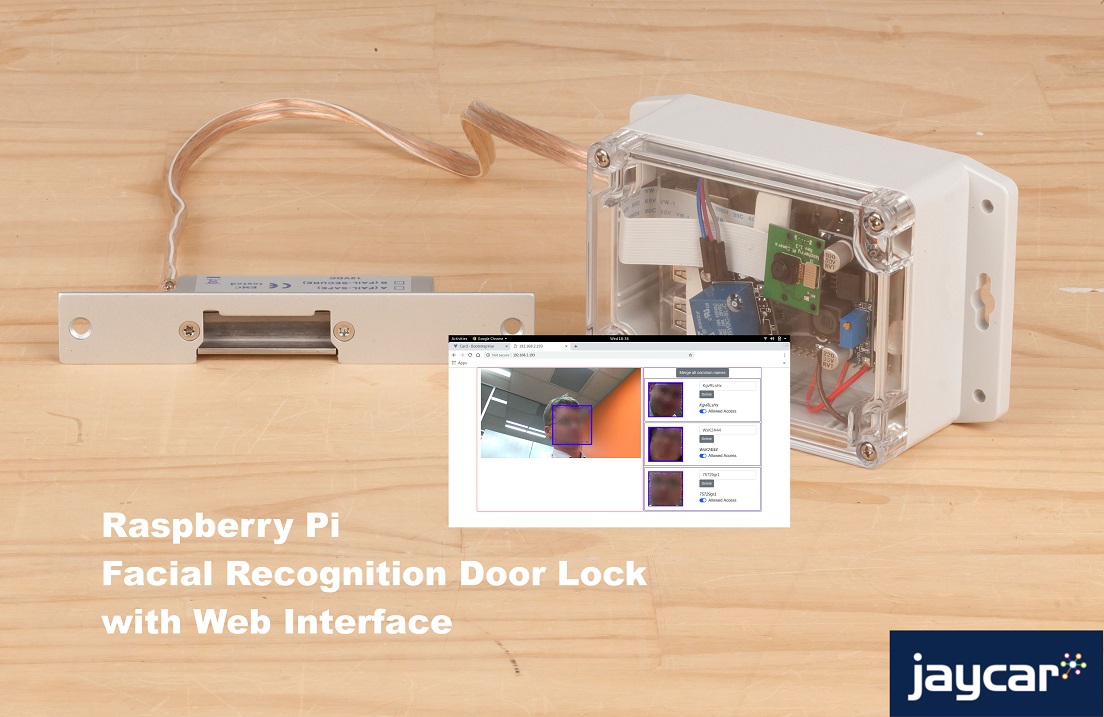 This project provides a network web-interface so you can check up on your raspberry pi camera. Every time the raspberry pi sees a new face, it will save it onto a database and allow you to Allow or Disallow those people from entering your room.

If it sees a face that you have allowed, it will activate the door-strike so you can open the door.

In this project, we are using the XC4514 with a 12v power supply to provide power to both the door strike and the raspberry pi. 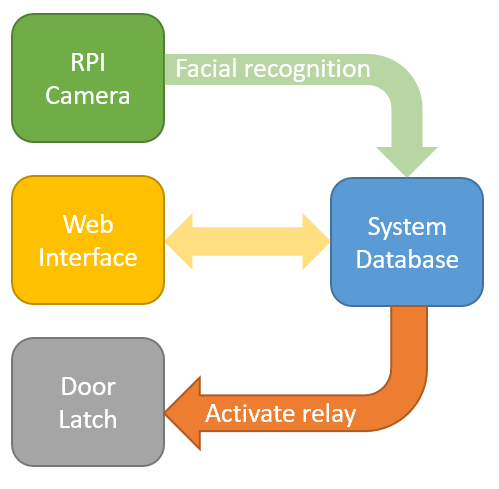 The idea is simple; the RPI camera looks out infront of the door lock and runs a program to recognise faces. Once a face is detected, it will then generate an ID for that face, and check if it is in the database.

When we access the web interface, it can show us a list of faces that have been detected and have a switch so we can allow / disallow each one. (faces have been blurred below for privacy, but the blurring does not happen on the unit.) 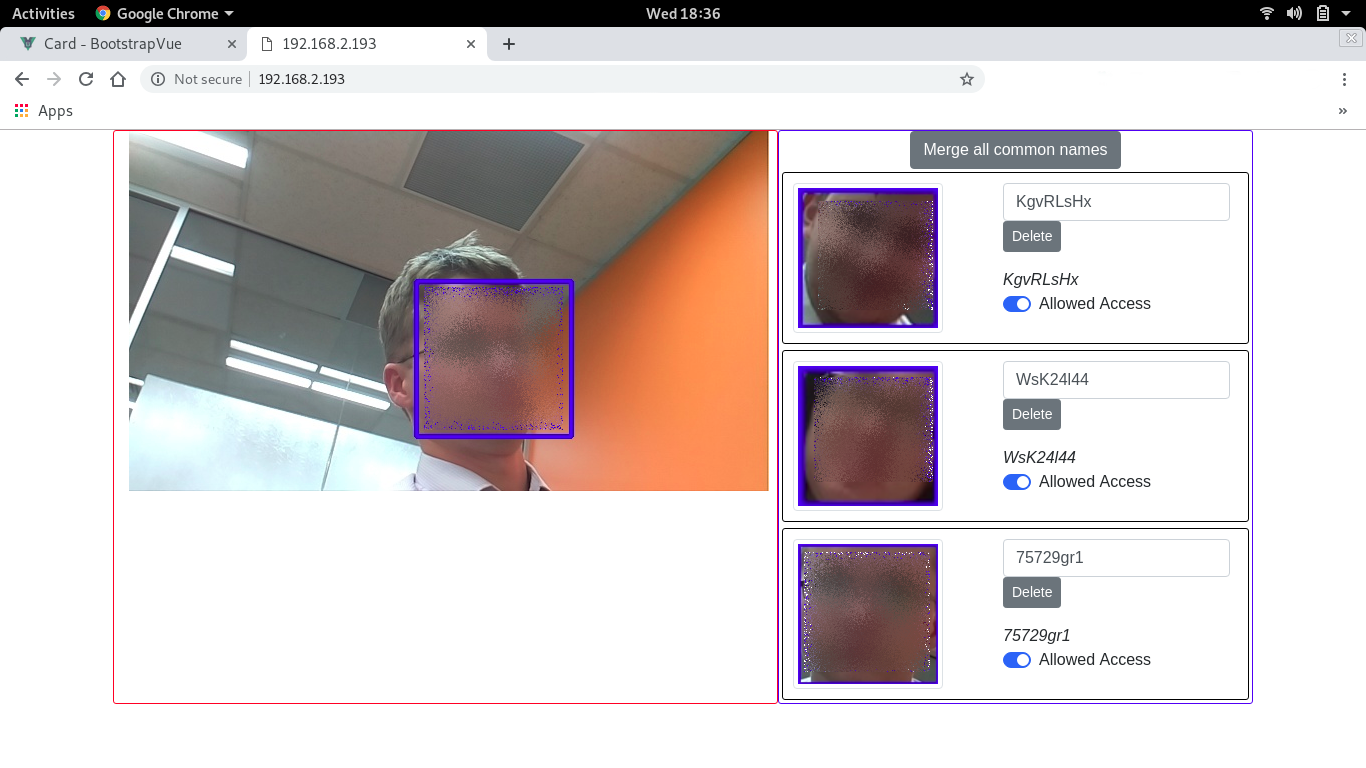 The code is cobbled together with python but if you're good at making web interfaces (using vue.js) then we'd love some contributions to make the interface better.

The general schematic to the design is below. This design uses the XC4514 to power the rpi off the same power supply as the relay / door strike. We also use a 4 terminal block to make mounting and connecting cables a bit easier. 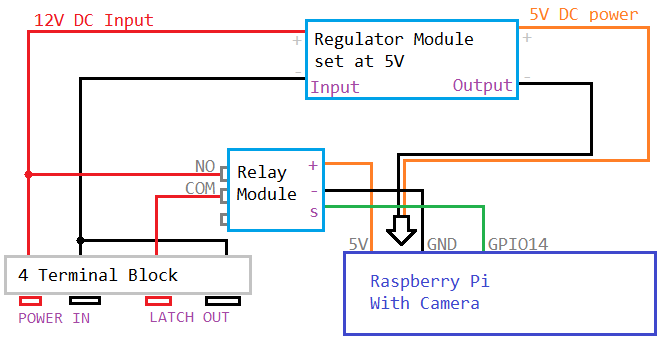 To control the relay, we use the RPi Camera running facial recognition code, from the face_recognition library by @ageitgeu and our additions below.

We've set up a startup script to make it easier to install this software but it is still under a bit of development. Try it out and let us know of any problems via the issues tab on the github repo.

Once you have booted into linux on your raspberry pi, you can type the below commands to download this repository and run the setup script:

This should set everything up for you and reboot the pi when it is finished.

While it's running, feel free to go through the Assembly Instructions and build the rest of the housing before placing the rpi in.

Note: Make sure to jot down the IP address through the ifconfig command. There is no screen once it is all mounted, so we will have to remote into the device to make changes. if you want to use something such as "http://camera.local" as your network address, have a look at mDNS.

The code itself is easy enough to follow and has 3 main parts:

We've commented the code as much as possible, so check out the scripts and get a feel for what's happening if you want to modify any of the program.

We've tried to make this a little easier without having to buy a tonne of screws and to make it fairly waterproof, but there's always room for improvement; feel free to experiment with mounting and let us know how it turns out! We can update the project with recommended changes.

The following is just a guide on one possible way to mount it. For our purposes though, these work well enough.

The width of the HB6251 is 80mm wide, so we're aiming to cut an acrylic panel at least 80mm wide so that it can snuggle into the case.

Start by marking a line straight across one of the edges of the acrylic, 80mm in from the edge using a pencil. 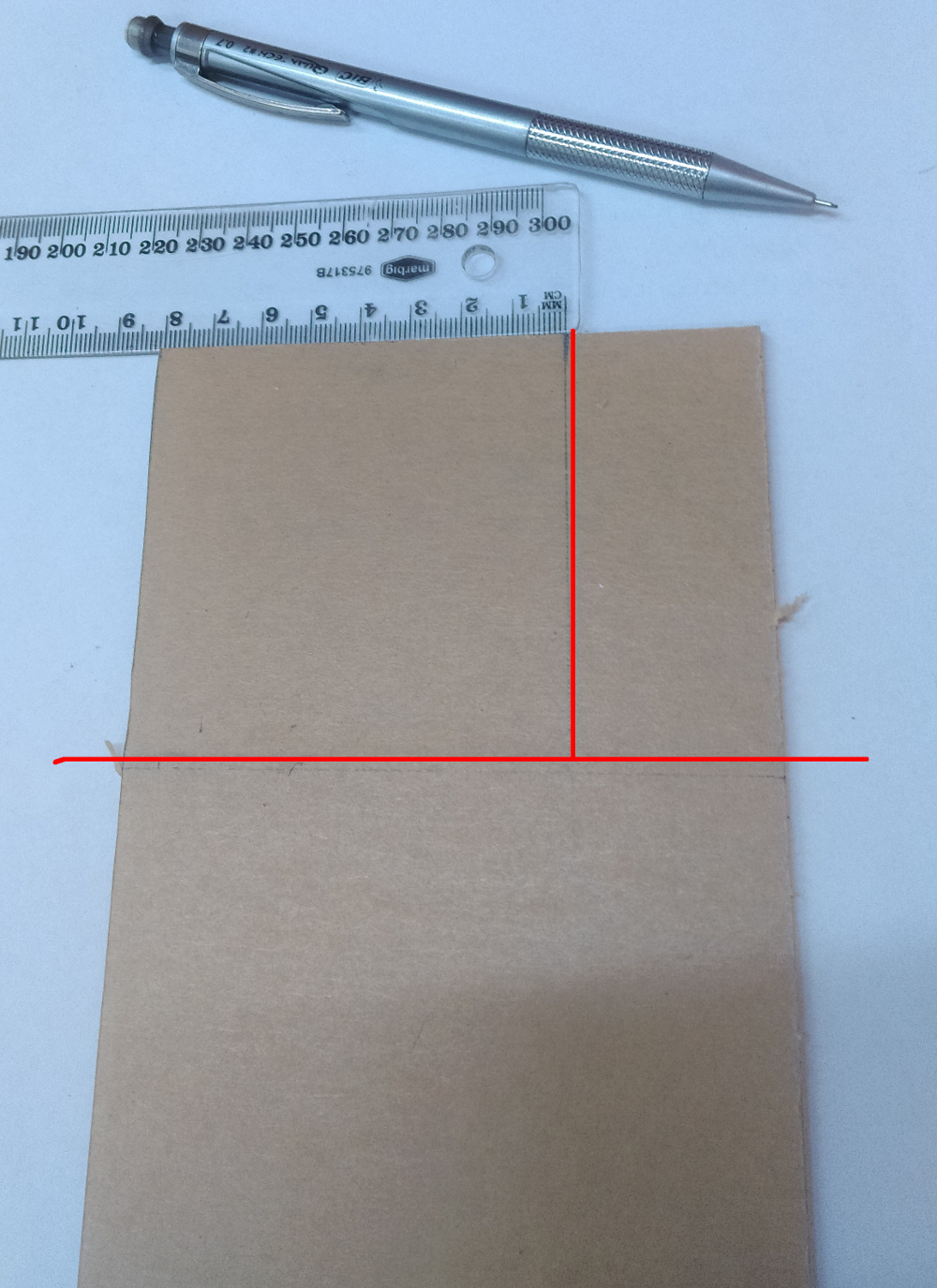 In the photo above we are using a smaller piece, but the idea is the same. You need to use a ruler to ensure that the line is straight, and "score" it with a knife ( multiple shallow cuts to break the surface). It works better if you score both sides of the acrylic, so make sure that you make it straight and accurate.

Score both sides, then use force to push down, with the edge of a table or bench right on the line of split. 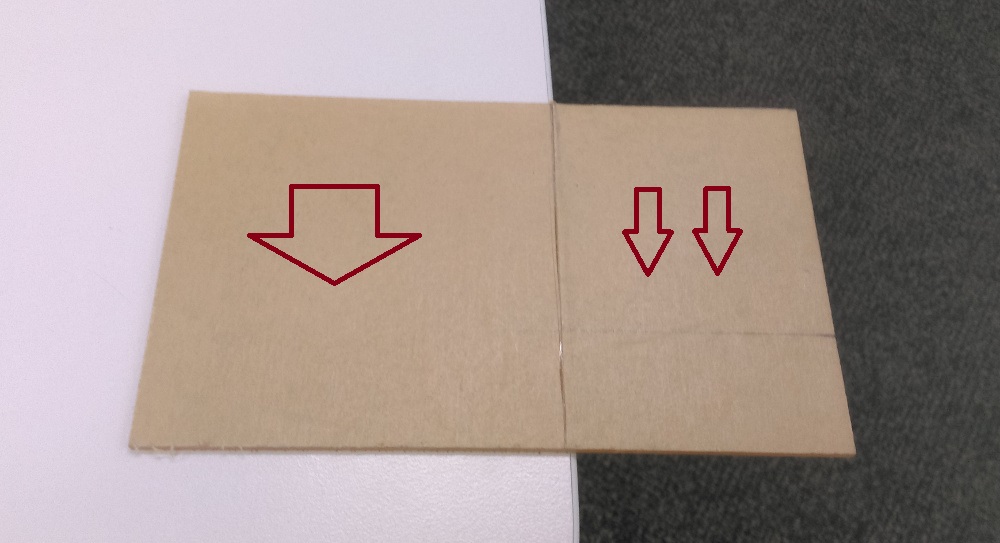 With a bit of force, the acrylic should eventually snap into a very clean sharp line. If not, then it's possible that it was not scored enough or the force was a bit too un-even. It can take a few tries to get right so get a few spare HM9509.

The regulator is adjustable, so we must adjust it to work at the 5.1v required by the Raspberry Pi.

Previously we have thought to use socket connections to connect straight into the 5V pins on the raspberry Pi, however in hindsight this could lead to problems and instead, we'd recommend soldering on a micro-USB connector ( slice up an old cable or use WC7756).

Keep in mind that this section is completely optional. It could be better to just tap out the 5V connection to the outside of the case, using the WC7756, and drilling a hole to hot-glue the end of the cable so that it is connectable from the outside. This might mean that people can pull out the power supply however.

Connect up the regulator and adjust it to 5V - 5.1V before you connect it to anything on the raspberry Pi. 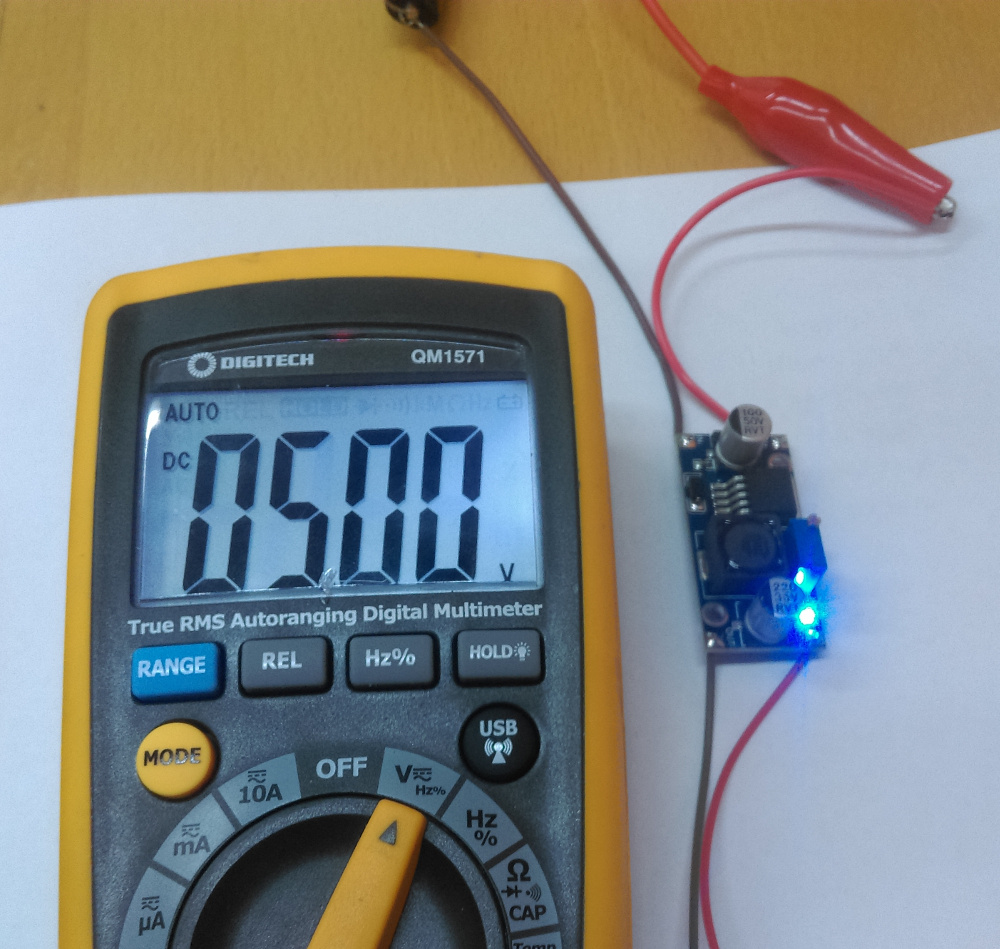 The regulator does a great job of providing the current and stable voltage that we need.

Here we just used our double-sided tape to position the regulator, relay, and camera onto the acrylic base. You could use screws and nylon washers here to make a bit more of a professional mount / display. 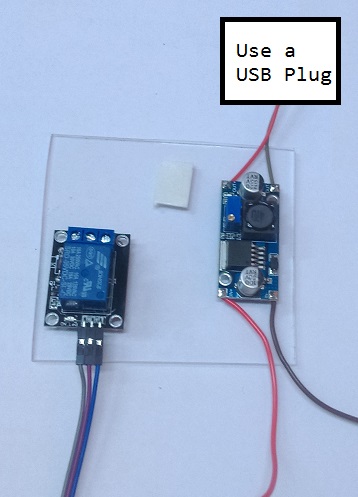 In the picture above, we didn't attach the camera. That will go on last once it is plugged into the RPi.

Also remember that we are using a USB plug to power the device. If the wires to your plug is a bit flimsy, you can lock them down with either zip-ties (and drill-holes near the cable) or some hot-glue to do the trick.

The terminals are easy to place. Simply drill 4 holes in the housing to line up with each of the terminals. If you want to make the entire assembly a tad more waterproof, you can drill them underneath the unit for when you mount it to the wall, which will cover up the holes to protect from splashing. See the below picture for guidance.

Remember that one Red/Black pair will be the power in, and the other will be output for the latch. You should mark this on the unit once you have mounted the terminal block (either by glue or screws) so that you do not get confused later on, otherwise the device will not turn on. 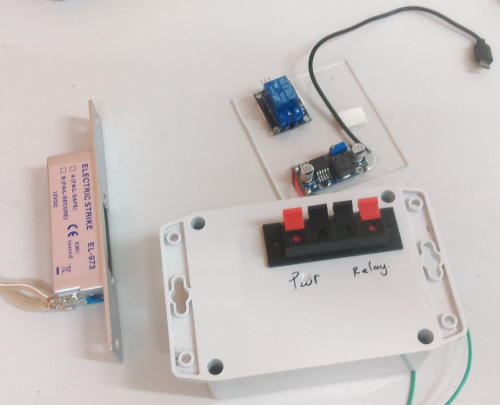 You should put this terminal block to the side so that you have enough room in the unit for the pi to fit in, around the USB cable.

We've labelled them as general and active - which changes how the connection to the door strike is working. If you want the system to be completely 5V ( as so there is no 12V inside the case, and you are not using the regulator) then you can go with the general case, so that the terminals (A and B) will be shorted once the signal comes from the software ( via connecting A/B to the relay COM/NC).

Otherwise, you can connect it as shown in the 12V active which means that terminals A/B will act as a power supply; providing 12V when a signal comes from the software.

Either way is possible; it's just a case of how you want to set up the door strike with it's own power supply or using the power supply connected to the raspberry PI. 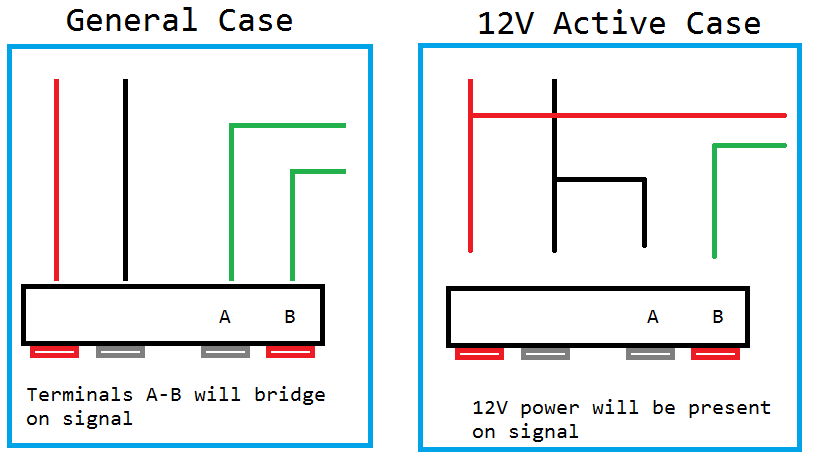 Once that has been done, you can connect it all up and press the acrylic sheet in. You should find that the acrylic is fairly tight but not impossible fit against the walls of the container. Once the relay and required components are in, the pi should power up just fine. You can run some test code to see if the relay functions before putting it in as wel. 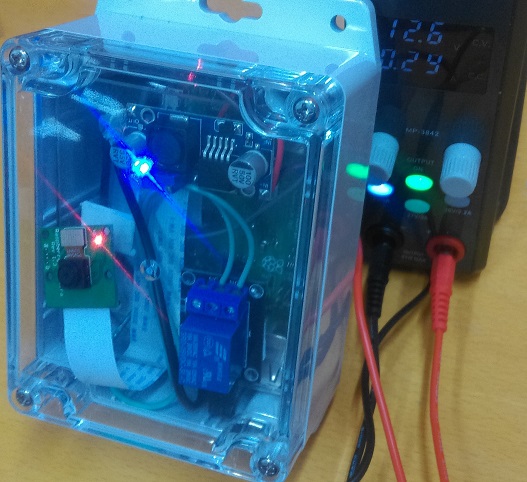 Once it is in, test it out and tighten the screws so it remains water-proof.

Here is a screenshot of the device in use. Once it is hooked up to the network, find the device IP through your router settings or otherwise and open the page on a web-browser such as chrome.

Here it will generate a thumbnail of each face that it has found and has memory of, as well as the current live feed. you can delete users and deny access. You can access the webpage by going to the ip-address of the raspberry PI. If you also enable ssh access you can connect to it wirelessly and configure it from within.

There is a wide variety of what you can do with this project; for instance, if you want to connect a speaker system to it, you can use something like PyMedia to play audio such as a voice prompt to say "access denied."

the file functions.py has the accessDenied and accessGranted functions that define what happens when the user is denied or granted access, in our code you can see that it turns the relay on and off.

Below is a list of items we'd like to see in the project, but haven't had time to implement ourselves. If you want to work on these issues below, click on the related issue number and comment anything you might have issues with, we're happy to help you as much as possible.