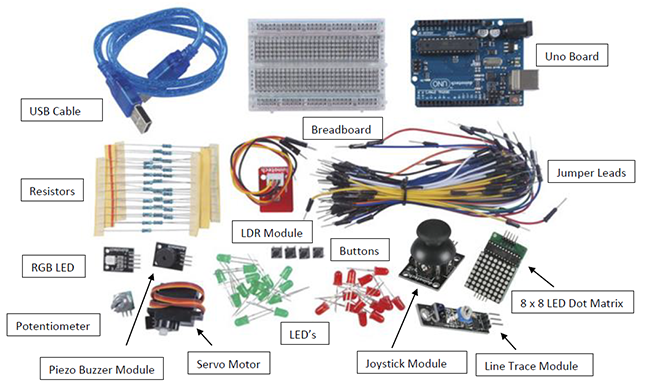 Arduino® is an open source hardware and software prototyping environment, but what does this mean? Open source means that the boards and programs have been developed by a community of people who are passionate about building their own ideas into projects, but also are willing to share their knowledge, designs, code and skills with other like-minded people. You not only have access to what's in this kit, but a wealth of shared resources, examples and project ideas to help you develop and learn. You can find out more at the Arduino® website: www.arduino.cc.

The Arduino® boards are designed with education in mind- in fact they were developed at a University to make electronics easy for artists and other people unfamiliar with programming electronics. It's possible to build complex circuits without soldering, but simply by plugging jumper leads, modules and breadboard together with the main Uno board.

The Arduino® IDE (integrated Developed Environment) is available as a free open-source download that works on Windows, Mac and Linux, and provides beginners with a simple intuitive programing language. It also allows advanced users to develop powerful programs using the vast range of downloadable libraries that the Arduino® community has created.

We have specially selected the components in this kit to allow an easy entry into the world of Arduino®, so that you can work with the examples included with the Arduino® IDE, and obtain a broad understanding of how the Arduino® software and hardware interact. This kit is also compatible with the full range of Duinotech shields and modules, which can be used to extend your Arduino® experience.

Now we're going to open a sketch and program the Uno. A sketch is a set of instructions that the Arduino® IDE compiles into a program the Uno can understand. Click on File>Examples>01.Basics>Blink, and a new window will open with some sketch code. If you want to understand the code, see www.arduino.cc/en/Tutorial/Blink.

Now click Tools>Board>Arduino Genuino/Uno. This tells the IDE that we're using an Uno board. If you do use other boards in the future this might be something different.

Then click Tools>Port and then click the Serial Port of the Uno. It might be labelled 'Arduino/Genuino Uno'. If you're not sure which one it is, unplug the Uno board and try clicking into the menu again to see which Serial Port disappears. Plug the Uno board back in and check that the board reappears. Finally, click on the

button to compile and upload your sketch. After a few seconds, the TX and RX lights on the Uno will flicker (this means that programming is occurring), then the L LED will flash on and off slowly- the Uno is running our sketch.

If you didn't get the LED flashing, check out the troubleshooting guide at www.arduino.cc/en/Guide/Troubleshooting

The Joystick Module is actually the same as a two potentiometers and a button built into the one module. Connect the Joystick to the Uno via the breadboard as follows: 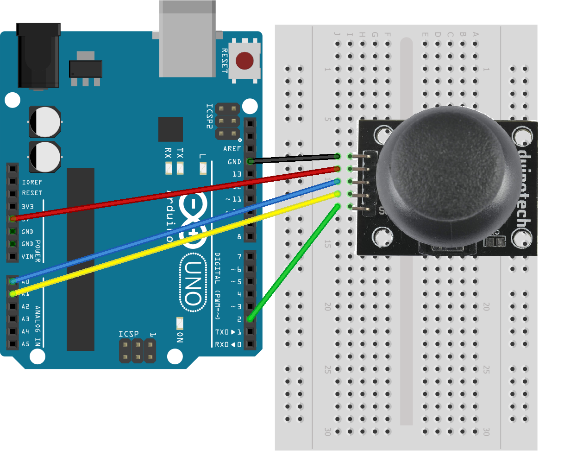 You can read the x-position of the joystick by doing:

See if you can combine the AnalogInput and Button sketches to work with the Joystick.

The Line Trace Module can be connected as below. The input can be read with the digitalRead function (the same as the button examples). 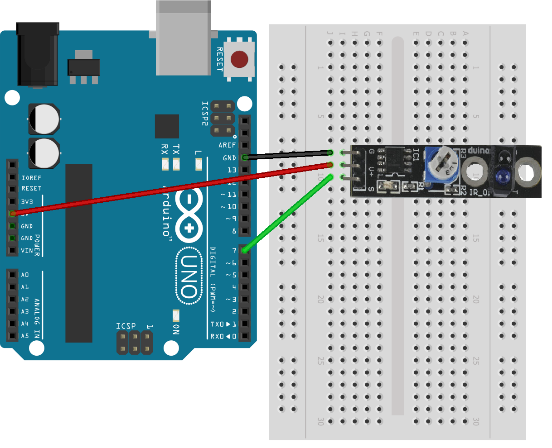 This simple sketch can be used to display the sensor output on the Serial Monitor. 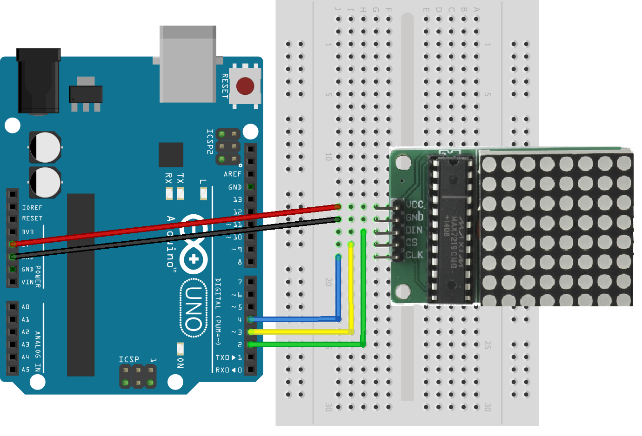 One of the great things about the Arduino® is the community, and there is a good chance that if you can't make something work, there's someone out there who has already worked out that problem and a Google search might even find them. Some helpful pages: