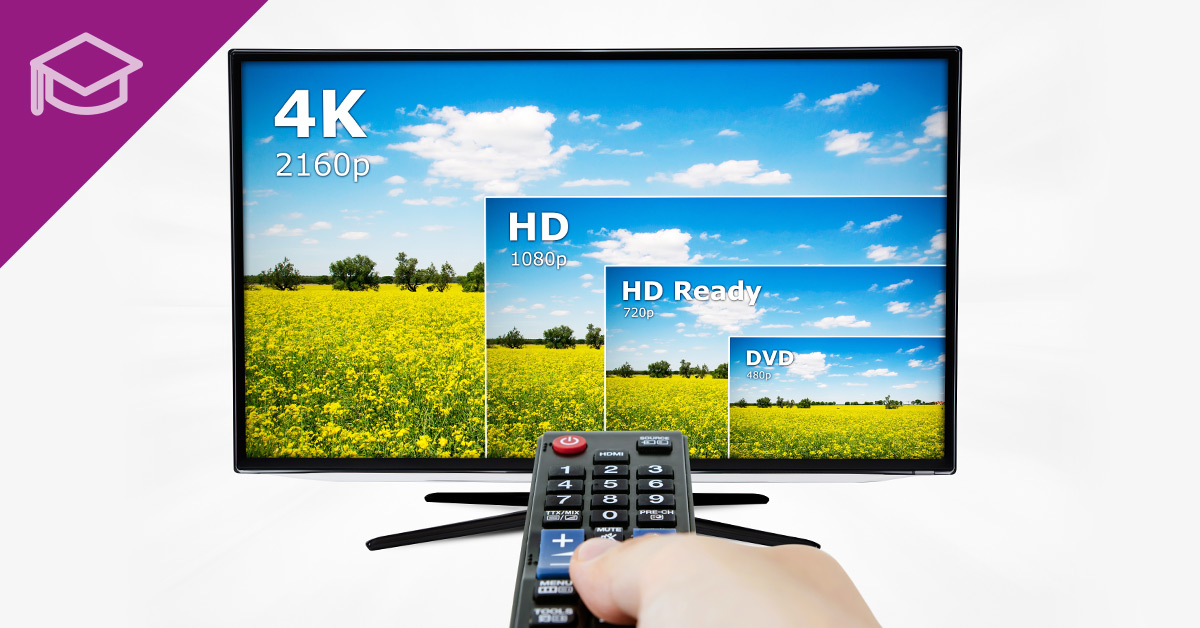 The eyes have it

The sheer visual intensity of this ultra-HD format must be seen to be believed.

DVD and BluRay are diminishing in popularity as bandwidth and streaming options embrace higher-resolution formats. If you thought 2K brought you a powerfully immersive experience, you'll be knocked out by this ultra-HD format.

At 3840 x 2160 pixels, the level of detail exceeds default visual acuity by such a degree that it tends to elicit a subconscious suspension of disbelief. In a similar way to how the cinema experience of a movie is often more immersive than kicking back and watching TV, it helps trick your brain into forgetting that what you’re seeing is not actually real.

Besides the escapism angle, here are three reasons why this format is making waves.

As larger TV screens become increasingly affordable and more popular, resolution needs to keep up. All that space needs to be filled with visual detail; a pixelated or low-res image on a 55in screen is purpose-defeating.

Standalone media players that support 4K greatly expand the functionality of your TV by allowing you to run apps and play games. They also allow you to stream directly from the internet or play 4K media from sources such as portable hard drives, which is extremely valuable if your TV doesn’t natively support networking.

There are far more serious applications for 4K than just entertainment. Surveillance systems that support this format can reliably record number plates, tattoos and other identifying features that can potentially tip the balance in a criminal case.

See below for more information about what makes 4K special.

4K and HDR (High Dynamic Range) - The Ultimate in Vision

When the Blu-Ray and HD DVD battle was raging, few of us could dream of a greater-than-high-definition viewing experience. After all, what more could you need? But that was at a time when a $10,000 Plasma TV was a HUGE 42" monster. Now a 42" screen is virtually the minimum in most households, with 55" or greater becoming the new standard. But when you start getting all that size, 1080p high definition isn't really that high definition any more. We're now seeing the next generation of players and TVs, with 4K UHD HDR.

I know what you're thinking... a new format? Not again! Like any advance in technology, there are winners and losers. Let's take a quick history on format wars...

Not the first analogue formats, but the most prominent battle for home entertainment. Sony introduced Beta-max to the market in the '70s, but JVC introduced VHS a year later. They quickly won over the other proprietary formats available, but commenced their battle over market share. By 1980 VHS had just nudged out Beta-max as top dog in the USA, and their decline continued. Beta-max machines were still produced until 2002, however VHS was heavily dominant, with the last machines produced in 2016.

We probably all still have at least a few DVDs lying around, but you may not be as familiar with Laser Disc. Laser Disc was a record-sized double-sided optical disc, but its short playback time and size saw its initial success dwindle. They weren't recordable by the average consumer, so they struggled to compete with tape-based formats (such as VHS) at the time, despite their superior playback quality. Then came DVD - much smaller, longer playback, and more convenient. Laser Disc sales had declined rapidly before DVD took hold. It was more of a "replacement" than a competitor. DVD ultimately became far more popular than Laser Disc, however the two formats never truly competed head-to-head.

In the early 2000s, Blu-ray and HD DVD optical discs answered the call for higher definition formats than DVD provided. Both formats offered HD. The two carried along side-by-side for a few years, until the mid-2000's. Around this time, high definition TVs were commonly available at a reasonable price, and as demand grew for high definition content, the battle for a dominant format heated up. For a while, both formats were supported by many manufacturers and, and in 2006 you could find a player that suited both formats, appeasing consumer demand to resolve the problem. However Blu-ray slowly inched out HD DVD over the coming years, and in 2008, several key studios distributing HD content moved exclusively to Blu-ray. This effectively won the battle for Blu-ray, with manufacturers of players quickly following suit.

Fortunately for now, with Blu-ray having already won the HD battle, there isn't yet a new player in UHD (Ultra High Definition / 4K). But while there isn't a new format competing for your 4K attention, UHD Blu-ray still has two hurdles. Lack of titles, and lack of players. Both of these things add up to high costs for consumers. However that is rapidly changing as adoption of this new format increases. Prices have fallen from thousands to mere hundreds in a short space of time, and will soon be as common as a standard Blu-ray capable player.

The Diminishing Relevance of Media Formats

The other consideration here, is while a UHD Blu-ray player might cost a lot, you can already stream 4K UHD content online from sources such as Netflix, at no increased cost (perhaps a subscription upgrade or a little more data-usage, but that's also becoming a non-issue). If you have one of these streaming sources, you may never need to buy a 4K HDR player.

That's enough about the formats... let's get back to 4K and HDR.

The Difference Between 4K and HDR

You can't actually compare the two, because 4K is a resolution, HDR is a colour range - they're two different parts of what makes up the picture on screen. So let's compare them with their equal counterparts.

With resolution (such as 1080p, vs 4K), it's pretty much a "more is better" scenario. If all other factors are the same (such as screen size and refresh rate), 4K will outshine Full HD every time, as the picture has far greater detail providing a more life-like image. Just like the step from standard definition to HD provided greater clarity, 4K presents absolutely stunning detail in every scene.

You may have subconsciously noticed, but many movies have scenes where it's so bright it's like looking into the sun, or so dark and scary your teeth are chattering. That's great in principle, but it still feels like you're just watching things on a TV. Much like viewing a perfect sunset in person, but failing to be able to capture that with a camera. HDR colour extends the possibilities of this with brighter whites, darker blacks, and richer colours in between. It makes a huge difference, allowing you to see greater detail in shadows for instance, just like you can in real life. Our eyes can process a vast range of colour and brightness, so HDR colour begins pushing those limits standard colour doesn't come close to.

What's Required for 4K and HDR?

Advanced technology is much like a chain. Every link needs to carry the same load, or the chain will fail at that point. For this reason, if you plan to use your 4K HDR TV to its maximum potential, each link in the chain must be capable of 4K HDR. That means all cables, switchers, receivers, or anything else you have in the mix. If you run a HDR Blu-ray through a cable that's not capable of handling the data, you'll end up limiting the quality of the output. The capabilities of each of our products is made available, so you can be confident of its ability, based on the quality of playback you want. If you're only playing standard Blu-ray on a HDTV, you can often get away with the budget HDMI cables. If you want to view (or plan to view in the future) the higher quality 4K / HDR signals, investing in the quality hardware now would be a wise move.

On a somewhat related topic, you might be wondering where 3D fits into all this. Well, in short, it doesn't. 3D was fun for a while, and we all enjoyed charging our special glasses to sit in front of our TV (not). But recently all major manufacturers have announced their abandonment of 3D TV in 2017. This invariably means that content for 3D will rapidly become difficult to find for newer titles. After all, distributors of content don't bother supporting unpopular or uncommon features - why would they! So you may shed a tear for the dying days of 3D, don't fret. 4K UHD (and whatever is coming next) is superior in almost every way, and you don't have to endure a headache to watch it for long periods either!

All of these advances continue to push the boundaries of technology, and provide a more immersive viewing experience. Who knows what will come next!